My Least Popular Book Ever 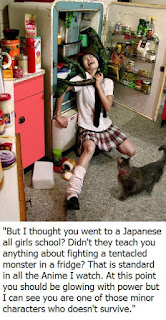 Well, I expected some push-back for posting Tournament of Rapists yesterday, and I was not disappointed. Because I wrote a sourcebook about rapists and sexual predators, I'm by definition a misogynist and potential rapist myself. Of course I am.

I'm not going to do much talking about this book, because I'm already working on my next book, and the one after that, but I do want to share Mark Cathro- my partner and publisher's- reaction to the vitriol filling up the Skortched Urf Studios Facebook page.

Thanks for contacting us, I'd be happy to speak about the title.


First, some background.  I'm the owner of Skortched Urf' Studios (Mark) and I've worked with the author of this product (Chris) for almost ten years now.  When I started publishing RPG material Chris did a lot of freelance work for me.  He then wanted to publish his own stuff, but didn't want to tackle the behind-the-scenes stuff like laying out products, marketing etc.  He wrote, I laid out and found art and it worked out very well.  Chris named his imprint Otherverse Games, and Skortched Urf' Studios is the publisher.

Over time Chris took over more and more of the production; doing his own layouts and forming partnerships with artists.  At this point Chris does all his own work, but has decided to keep publishing with Skortched Urf' Studios since we've been working together for so long.

I say all that to give you background.  Before the title in question (Tournament of Rapists) was published I didn't know a thing about it.  I don't vett his work, tell him what he can publish or oversee him.

Now, I don't say that to distance myself from Chris or his work.  I say it because it is the truth.  Chris is a big boy, he can publish whatever he darn well pleases in my opinion.  I for one think he is a mad genius with some of the crazy stuff he comes up with; including *this* title!

What I think most people don't realize is that the participants in these tournaments are the *BAD GUYS* that the PC's are supposed to kill!  Most of the "stat blocks" are for monsters/creatures for the PC's to fight!  I mean, people are up-in-arms about the TITLE of the book, can you imagine fleshing out the main bad guy who actually puts these things on so your party of good guys can go dismantle the entire organization and kill the Half-deamon Billionaire industrialist who runs it?  Now *THAT* is a bad guy worth fighting in my opinion. (See my remark about Chris being a Mad Genius, and I do mean that in a good way!)

Is there a metric ton of shock-value in what he does?  Yes, absolutely.  Is there a wealth of creativity and world-building in the settings Chris comes up with?  Again, yes.

Does he put out safe, kinda like what you already like but with some "twist" to make it a little different titles?  Hell no.  He's got a setting that pitts pro-life and pro-choice abortion factions against each other in a sci-fi setting with the volume turned up to 11.  Is that my cup of tea?  Not really.  But I do respect the hell out of him for *not* taking the safe route.

Sci-fi abortion war setting.  Sexual-predator daemons rampaging all over Tokyo. Like I said, he's a mad genius with the freedom to play in a sandbox of his own making.

Sure, a bunch of people are going to be upset.  Some of them will send us nasty emails or post things on forums or whatever.  (Most having never actually read the content, just upset about the title.) All his titles are marked clearly as for adults.  If you don't want to buy it, then please don't.  I do, however, firmly believe in free speech; *especially* when it involves something objectionable.  (Yes, it cuts both ways; everyone is free to criticize Chris and I for even putting it out.) I also think Chris is playing "The Internet" like a cheap fiddle because the same, few predictable people that seem to be outraged by *everything* will continue to insist that something on the internet they don't like *must* be destroyed.  And now people are talking about his titles and contacting me to ask about them. :-)

I've seen people assume Chris has "stolen" artwork.  (He hasn't.)  They assume he must be a horrible human being that wants to rape people or whatever.  (He isn't. And by the same token, do these same people also think George R.R. Martin wants to have sex with his sister because he wrote about two of his characters engaged in incest?)  He's a guy with a huge imagination who loves RPG's.

If a novel with this title was written and Jim Butcher, Anita Blake or Jack Reacher were going after the bad guys it might be a best seller.  But Chris makes it a game supplement and everyone who just reads a title assumes that it's about the players to run around sport-raping people for XP?  Time to gather up the torches and pitch-forks, right?  How many of the most vocal detractors have *actually* read the content rather than just the title?

Shocking title?  Yes, 100%.  Do I think we should hang Chris, burn his corpse and salt the Earth where his bones lay for *daring* to put out a controversial title (in a long line of them) that no one, anywhere, is under any obligation to purchase?  Nah, not really. But that's just my two cents.

Anyway, I do hope that clarifies some of the questions/concerns are about this title.  Thanks for contacting us!

That says what needs to be said.
Thanks, Mark.

Hey, congrats on the new book, but I have a question - is there a list somewhere of all the Black Tokyo products, so that I can be sure to get everything? Thanks!

There's a few other books which are basically out of print and have been incorporated either into Black Tokyo Unlimited or another core book.
CHRIS

Be warned, a professional outrage huckster, Jessica Price, is trying to get your product line banned and Drive Thru RPG shut down over your release:

Just wanted to say I'm sorry you're getting all the nonsense. It's just a bunch of outraged social justice warriors trying to do to this what they do to other forms of gaming.

I wrote a rebuttal of one of the people who has been leading this idiotic witch hunt here:

Where is the first one free? Definitely isn't on DTRPG.
http://www.drivethrurpg.com/product/54698/Black-Tokyo
PS: Sorry to hear about what is happening and the recent crusade against you. Got to love how sellers of products are willing to strong arm a marketplace to not carry other seller's products.

Don't you just love the "we read the title and do our review from that" mindset.
The funny thing about this, i was just reminiscing with an old friend of mine about the Satanic Witch hunts around D&D back in the 80's, when i started playing. Feels like the same thing. Narrow minded individuals with bullhorns condemning something they know nothing about.
Wonder how many of them actually read the product before they condemned it.
I like your work Chris. I agree with what Mark said "Mad Genius".
Carry on with the brilliant work, I look forward to reading more of it.

You should re-release it as "Social Justice Warriors: Hunting the Patriarchy."

I'm pretty disgusted by what's going on. It's one thing to actually read a product and decide it's something that should be banned and campaign for that to happen, it's quite another for senior staff at one of the big names in the RPG industry to demand someone elses product be censored without first having the due diligence to actually read the product in question. The first blog link above makes it clear that the latter is the case.

Is there any chance the book might get published somewhere else? Anywhere? Maybe here (though I don't know how we'd pay then)? Because of this shitstorm, I'd actually like to get a look at it myself. Also, I feel horrible for laughing at that pic's text. XD